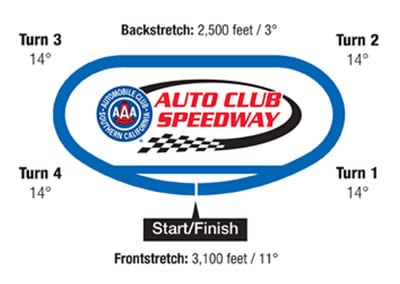 Auto Club Speedway, a California race track, has a rich and colorful history and has only been hosting NASCAR’s top series since 1997. Fans of Auto Club Speedway enjoy immense landscaping (over 136 acres) on the facilities grounds, which include more than 300,000 tons of asphalt. So what does that mean? Well, how about 32,000 paved parking spots for fans buying tickets for the track’s events! On June 21, 1997, NASCAR star Ken Schrader won the first race held at the track, which was a Winston West Series race. That same day, Mark Martin won the International Race of Champions event and Jeff Gordon won the Cup race the very next day. Auto Club Speedway has also played host to races in the NASCAR Busch and Craftsman Truck series, as well as events in the IndyCar Series and what is now the ChampCar World Series on its oval and road racing and motorcycle events on its road courses.